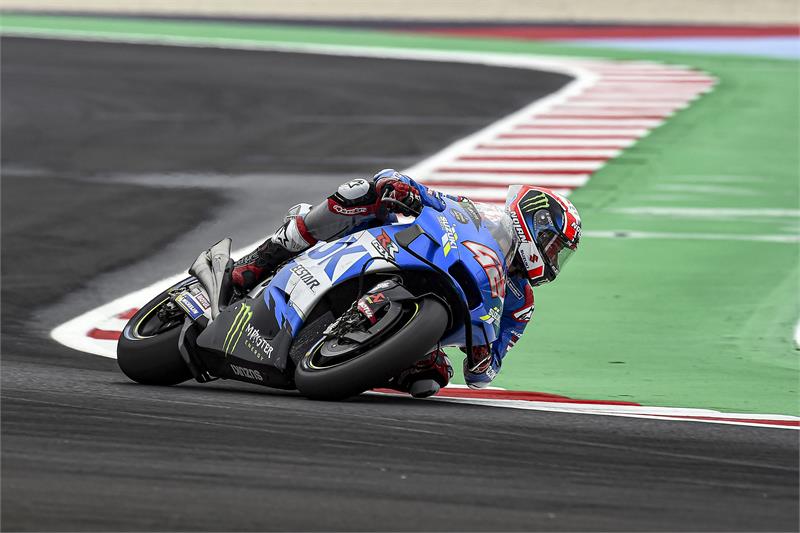 By Mbali3rd Nov 2021News
No Comments

The 2021 MotoGP™ season is nearing its end as Team Suzuki Ecstar and the rest of the teams and riders make their way to Portugal’s south coast for the penultimate race of the year.

Two weeks ago, at the Emilia-Romagna GP in Misano, Joan Mir and Alex Rins endured a hard weekend. The former crashed out on just the third lap, and the latter was forced to battle his way through to sixth place after a poor qualifying result. The team also saw their ‘reigning champions’ status taken away as Fabio Quartararo was crowned the title winner.

Mir and Rins will enter this second Portuguese round of the season aiming to bring their GSX-RRs to the podium and end 2021 on a high. When the series visited Portimão back in April, both Suzuki riders got off to flying starts and found themselves in second and third with Rins posting several fast laps when chasing down the leader. Unfortunately, he later had a small crash and failed to finish the race. Mir managed the podium, however, taking third.

Fans who make the trip to the southern tip of the Iberian peninsula are in for some thrilling action in the November sunshine; Portimão circuit’s ‘rollercoaster’ layout brings some of the fastest and most intense battles of the season, and it looks like this one will be no exception.

“I was third here when we came for the third round of the season, and the race was really good. I felt confident the whole time and I hope that I get those same good feelings when we get on track on Friday. Portimão is an amazing circuit, it’s like a rollercoaster but it’s really nice!”

“Portimão is a great track which I find really fun to ride. When we came here in April I was a bit unlucky because my pace was strong but I crashed out of a podium position. I’m ready to try again this weekend, especially as our bike has improved since we last came. I think we could be fast around here.”

“It’s quite useful when we revisit a circuit that we’ve already been to earlier in the year – it gives us a chance to compare how our bike has improved during the gap between visits. Last time we came to Portugal we had both riders fighting at the front for podiums, and it would be great if we can do that again. It would be nice to collect some top results for the closing part of the season.”