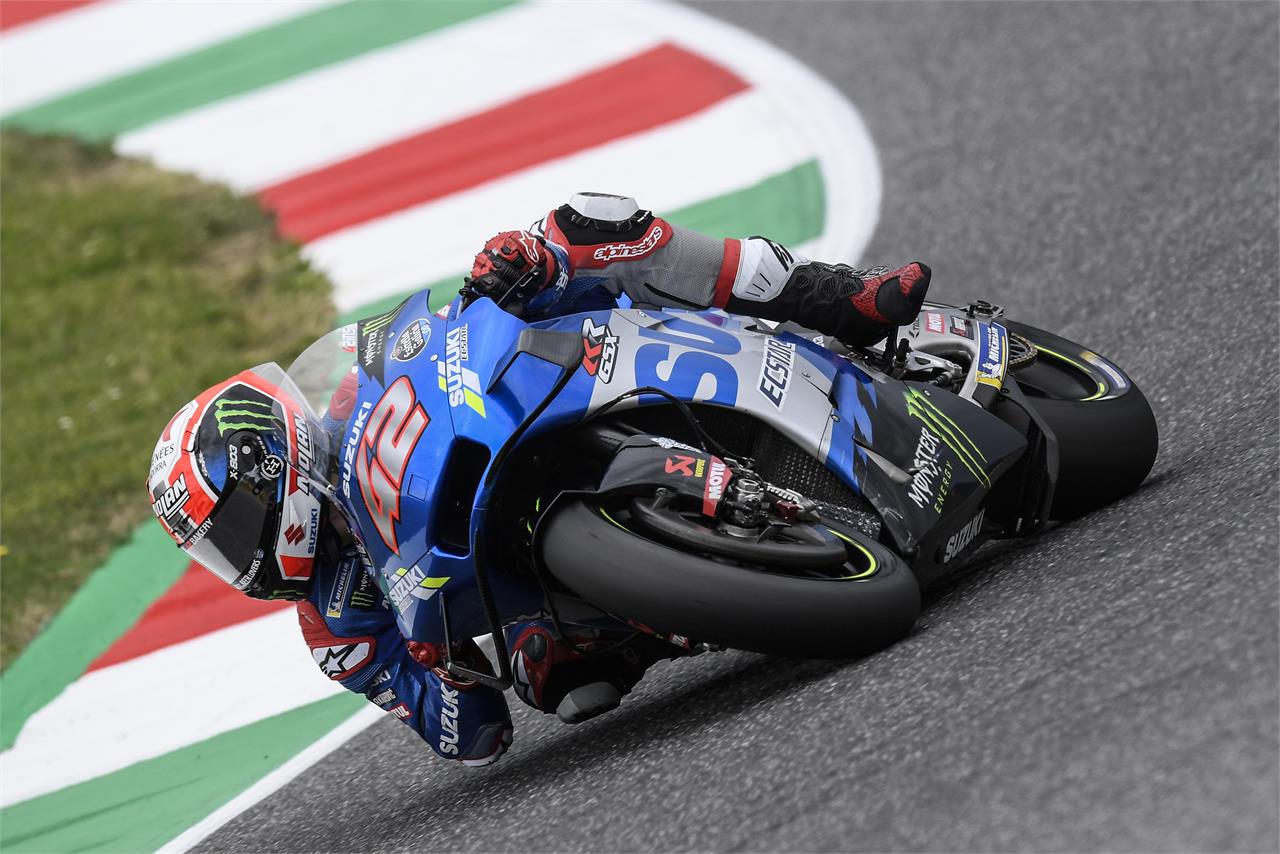 ALEX RINS MAKES HIS RETURN THIS WEEKEND IN GERMANY

By Mbali17th Jun 2021News
No Comments

Team Suzuki Ecstar and the MotoGP™ World Championship are preparing for another dose of back-to-back rounds following a short break after the Mugello-Catalunya double header.

The first stop will the Sachsenring circuit in Germany, where Alex Rins will make a tentative comeback following injury and Joan Mir aims to build on his championship points with another strong finish.

During the build-up for the Catalan GP on June 3rd, Rins suffered a crash while cycling around the Circuit of Barcelona-Catalunya. He was diagnosed by Doctor Xavier Mir with an “articular fracture of the right distal radius with a small displacement and high inflammation”. He underwent surgery at the Universitari Dexeus Hospital in Barcelona which saw the successful fixation of two screws. Two days later he began rehabilitation and gentle training and he has now been cleared to ride.

On Wednesday morning, June 16th, Rins revisited the Universitari Dexeus Hospital to undergo some checks and his stitches were removed before travelling to Sachsenring. Doctor Xavier Mir said: “After removing the stitches and checking his wrist we consider the mobility of the injury is pretty good and he will try to race in Germany. Of course he could suffer some pain during the sessions and he might need some physiotherapy”.

In the past, both Suzuki’s riders have achieved some strong results at this technical track, with Mir taking victory in the Moto3 class in 2017 and following it up with second a year later in Moto2. In his debut MotoGP season in 2019 he achieved seventh at the circuit, but Germany was missed off last year’s disrupted calendar. Rins has enjoyed two podiums here in the past, also in the Moto3 and Moto2 classes.

A feature of the MotoGP™ calendar for the past 23 years, Sachsenring is considered by many to be one of the Grand Prix ‘classics’. One of the most prominent features was added in 2001 and it’s known as the ‘waterfall’, turn 11’s plunging downhill right-hander creates a spectacle for fans but a challenge for mechanics and engineers.

Situated in leafy-green Saxony, the circuit’s location in the far east of Germany makes an ideal meeting place for fans from across central and eastern Europe. In a ‘usual’ season this would mean a huge number of spectators adding to the atmosphere, but sadly this year the grandstands will remain empty.

Curiosity – GP of Germany: It is the second slowest track on the calendar, using full gas, or wide open throttle, for only 15% of a hot lap. It’s also the shortest track in the Championship at just 3700 m.

“It will be good to ride in Germany again, I was here in my rookie season in MotoGP and I did well, but obviously we missed out on coming here last year. It’s a circuit I like, it’s quite technical with a lot of ups and downs and blind corners. There are far more left turns that right, so it’s important to make up the difference in the lefts. Tyre management is important, and you have to be very precise with your lines. There are not many good overtaking spots, but there’s the first corner and also just after the waterfall section, although in general it’s a hard track to pass at. I’m looking forward to trying for a strong result.”

“I went to see Doctor Mir for some checks and I feel quite well. He took out the stitches and the bone seems almost fixed. I have some pain when moving my wrist, so I will keep working on my recovery during these days. In any case, I will try to give it my all. We didn’t race in Sachsenring last year, so I’m really looking forward to getting back on track here in Germany. I’m very pleased to be back with the team; I can’t wait to see them all and return to racing with my GSX-RR.”

“We’re glad to see Alex Rins back on track this weekend after his injury and surgery in Catalunya. It will be tricky for him to come back at full strength, but he has already started his rehabilitation and the injury is healing well. This is quite a physical circuit for the riders, despite the short lap, so it won’t be easy for him but we know he is ready to push hard and recover from this bad patch. Joan Mir has had some nice consistent finishes during the last races, and we’re confident that he can continue to build on this success. We had a test after the race in Catalunya and we’ve worked on some small but useful adjustments which could help us in our quest. Sachsenring is not an easy track but we’re feeling ready for the weekend.”