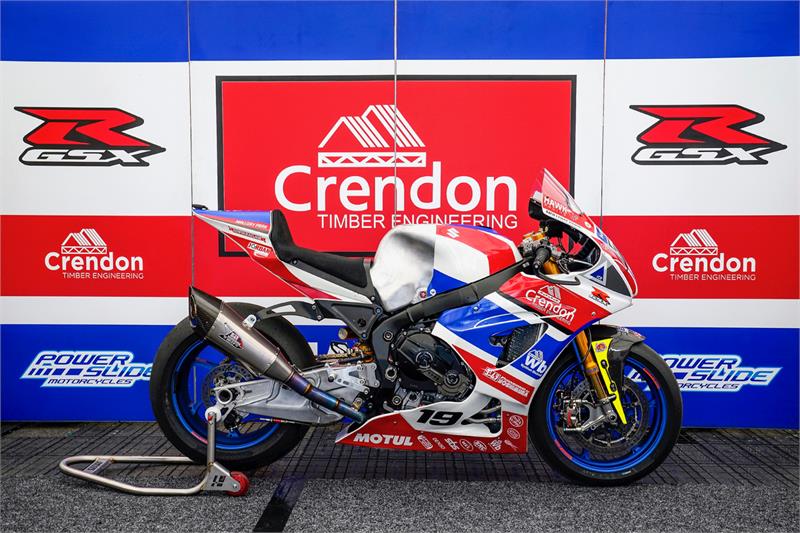 By Mbali1st Jun 2022News
No Comments

Hawk Racing has partnered with Crendon Timber Engineering for this year’s Isle of Man TT races with Shaun Anderson piloting Suzuki GSX-R1000R machinery for the Mallory Park-based squad in the Superbike, Superstock, and Senior TTs.

Hawk Racing Team Manager, Steve Hicken, said: “It takes an awful lot of time, effort, commitment, and resource to race at the TT, and so we’re really grateful to Crendon Timber Engineering for joining us as title sponsor for this year’s event.

“It’s great to be back on the Isle of Man after a couple of years away, and with Shaun Anderson onboard we’re confident we can help him develop and improve as a TT racer. At Hawk I think we’ve got a reputation for developing riders, both on the roads and the short circuits, so I’m hopeful that, with our experience, we can have a successful and safe couple of weeks.”
Anderson made his TT debut in 2012 and has lapped the Mountain Course at over 128mph. He’s also no stranger to the GSX-R, having run his own since 2017.

He now has one of the most experienced and successful teams in his corner with Hawk Racing boasting plenty of success on the Isle of Man, most recently in 2017, when Michael Dunlop raced the Suzuki Superbike to victory in the Senior TT.

Said Anderson: “To just be able to ride for a team at the TT is great, but to work with Steve and the team is a bit of a dream come true. I’ve ran bikes myself and with my dad for so many years, but you’re always doing everything yourself, whether that’s rebuilding engines, changing wheels, making suspension and chassis changes. So it’s quite a switch in mindset to work with a team.

“Getting on the Superstock bike was like putting on an old pair of gloves and we’ve done quite a few laps on it in testing and I felt comfortable. The Superbike was an education. This will be my first year on a proper Superbike, so I had to get used to the feeling of the bike, the character, the electronics.

“I want to break into the 130mph club this year. If you add together my best sector times it puts me at 131mph. I’ve just got to put it all together but I’ll never have a better chance than I do with the Crendon Suzuki and Hawk Racing team. Racing’s all about confidence and if you’re confident in the team, in the bike, then you can have your mind right and that gives you the best opportunity to achieve results.”

Hawk Racing will also be supporting Michael Dunlop at this year’s event with a Suzuki GSX-R1000R for the Superbike and Senior TTs.

Track action for the 2022 Isle of Man TT began yesterday, May 29th. Racing gets underway on Saturday June 4th with the six-lap Superbike TT, with the team also in action in the four-lap Superstock TT on Monday June 6th. Racing concludes with the six-lap Senior TT on Friday June 10th.