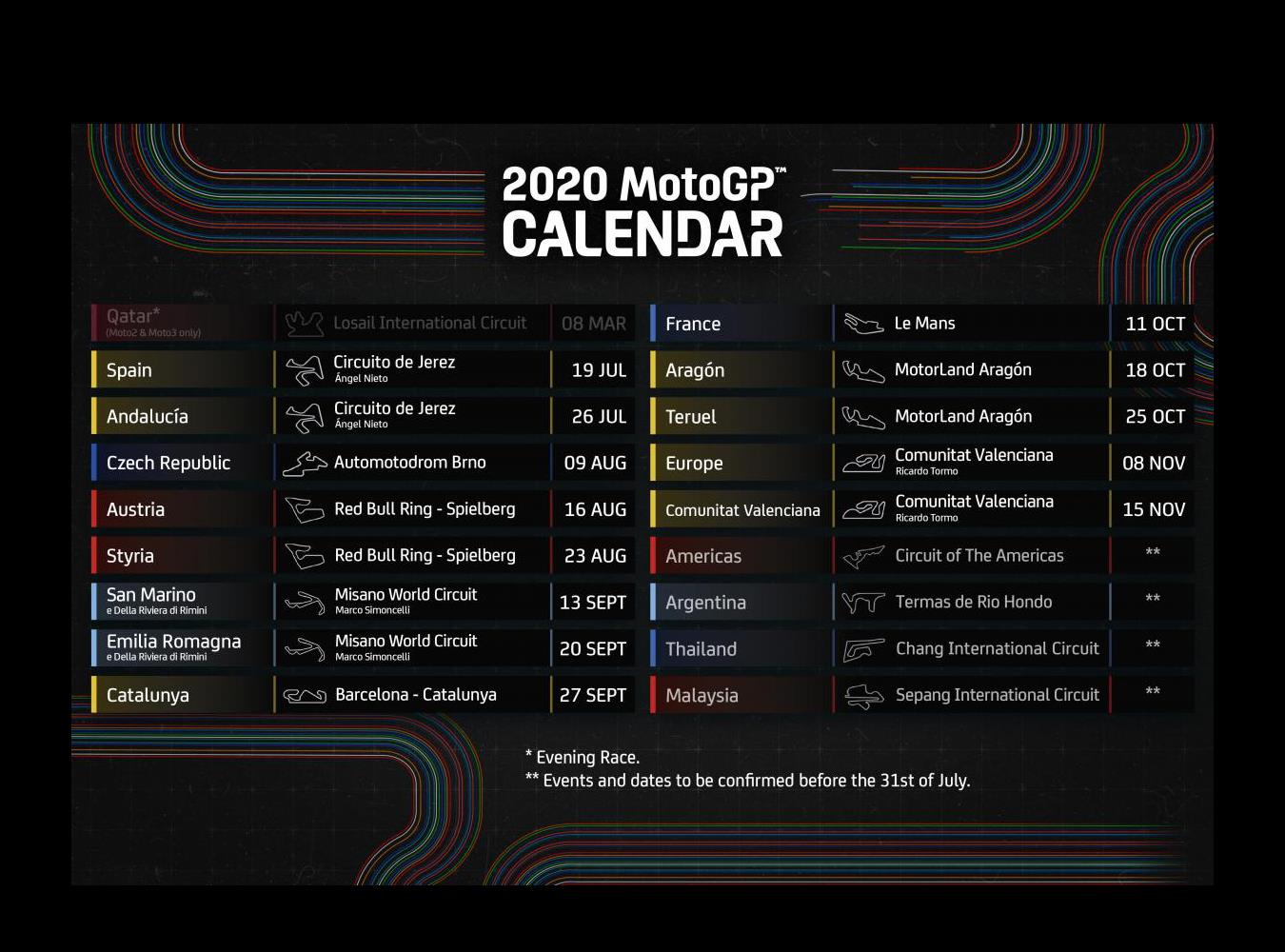 A new revised 2020 FIM MotoGP™ World Championship calendar has been issued that will run into mid-December and comprise a maximum of 17 events.

Two official press releases today (Thursday) by Dorna and MotoGP stated that ‘the possibility of holding events outside Europe will be assessed and confirmed before the 31st of July. However, the 2020 season will not finish later than the 13th of December and will comprise a maximum of 17 events.

‘All dates and events, as well as the eventual attendance of spectators, are subject to the evolution of the [COVID-19] pandemic and the approval of corresponding governments and authorities.

Dorna Sports CEO Carmelo Ezpeleta sat down with motogp.com for an interview to debrief a few current events – this time mostly centred on the 2020 MotoGP™ calendar.

What can you tell us about the calendar?

“It has been hard work from our side and from the side of the promoters, finally we obtained these possibilities. Once we had the protocol approved then we were able to propose this calendar. In principle we have some circuits where we will repeat races one week after another, because this is easy for movement and to maintain the protocol, although there are others where we will have just one race. We thought when we ran into the problem of the pandemic, we realised we can do 13 races and then if it’s possible to go outside Europe it will be interesting. The races outside Europe need to be confirmed before the end of July, then also our agreement with the manufacturers and with the teams is to finish the Championship no later than the 13th of December; that means we need to decide which of the races to do, if all of them are possible, and we will decide which races we will have outside Europe. This is something we will put in the calendar as a proposal and we will decide on it no later than the end of July.”

So we’re waiting to see how the pandemic evolves and for permissions from authorities for the final four races at the end of the year?

“We need to wait because as we’ve commented before, to do the races outside Europe it’s necessary to do it with spectators. We are waiting to see the development of health measures in other countries – in the States, Argentina, Malaysia and Thailand – and then we will see what is possible to include in the calendar.”

Could the season potentially finish in Malaysia?

“We will see. It’s a possibility, but all the races outside of Europe are pending and we don’t know exactly. If there are no races outside Europe then the Championship will finish like every year in Valencia. If not, it depends which races are able to do it but Malaysia is one possibility, yes.”

What more can you tell us about the protocol for going racing?

And we also have the MotoE™ calendar now announced…

“Yes. There will be five rounds: two in Jerez, two in Misano and one round in France. The second Misano round and the Le Mans round will have two races.”

Do you have a message for the paddock?

“I wish you all the best possible season. The most important thing is for everyone to take care of their health, and as always, we wish everyone a happy season with no crashes!”