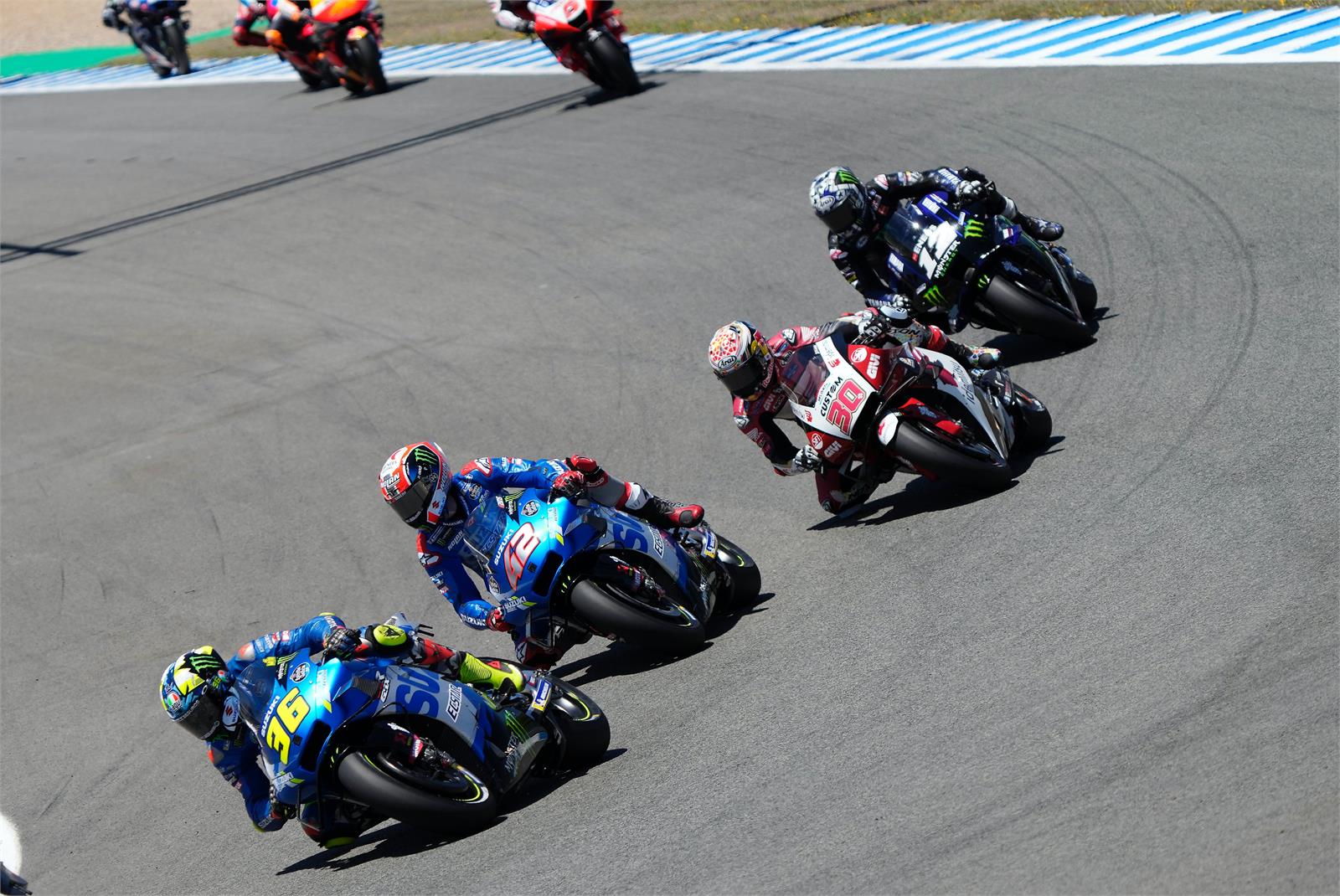 By Mbali3rd May 2021News
No Comments

The fourth round of the 2021 MotoGP™ World Championship got underway at the classic Spanish circuit of Jerez, and race day had plenty of surprises in store. Team Suzuki Ecstar’s riders made full use of the morning Warm-Up to fine tune their GSX-RRs, once again showing their consistent pace ahead of the 25 lap race.

Joan Mir and Alex Rins got decent starts from their Top 10 grid spots, slotting into seventh and ninth off the line and quickly moving up to sixth and seventh. The pair looked likely to continue their fight through the field, with Rins in particular looking keen to make a move. But, unfortunately, on the third lap of the race following a twitch and a wide line, Rins lost the front of his bike and went down. He was thankfully OK and did well to rejoin the race – although he had suffered damage to his aero-fairing. He used the rest of the race to collect useful data, finishing in 20th.

Meanwhile Mir was fighting to hold onto sixth, something that he managed well. He then went about setting personal best laps, placing himself in a solid position, keeping the closing group behind him at bay. On Lap 19 he passed Fabio Quartararo for a nice fifth place position, and after spending a couple of laps trying to hunt down Takaaki Nakagami, with the clock ticking down, he decided to settle for fifth and take solid points.

Team Suzuki Ecstar will be back on track in Jerez tomorrow for a one day test.

“In the Warm-Up session this morning we evaluated tyre options and we decided that Joan would use the soft front and Alex the medium front, and this choice wasn’t bad. Joan made a good start and managed the race well, getting 5th position in the end. Maybe with a few more laps he could’ve gone for better position, but we will never know. It was a pity that Alex crashed in Turn 6, especially because he had strong pace even after he rejoined and he had podium potential. Let’s learn from today and try again next time out.”

“We have become stronger at this track, and despite the qualifying positions we had hopes of the podium for our riders, but unfortunately it wasn’t to be. Joan was very patient and consistent and he got a nice 5th position, so we’d like to thank him for the sensible ride. Alex also had podium pace so it was a real pity for him to have the crash, we’ll look into what happened and then begin working for the next races. Anyway, overall I’m happy with the way we are going.”

“For sure I expected more from this race, but I gave 100%. It’s easy to say now ‘maybe we should’ve changed this or that’ but in reality you’ll never know if these things would’ve helped. After all I was competitive and I fought for the podium, and I wasn’t far away from that, so I’m satisfied with the work done here in Jerez. This isn’t the best track for us and the hot conditions made things harder too, but I’m glad to take the points for 5th place and we’ll look to improve again in Le Mans and hope to get some stronger results in the next races.”

“The crash today was a shame, it was bad luck really. There’s a bump at that corner, and normally it’s not much of a problem, but with the full fuel tank it felt quite bad and then the rear stepped out, I released the brakes, braked again, and went wide – that’s where I lost the front, on the dirty part off line. But despite losing part of the aero-fairing, I rejoined, had nice pace and I actually felt very good. I was faster than the leading group. I’m really sorry to all the team who have worked really hard as always. Let’s continue to work for the next races, and I hope to qualify much better so that I can be at the front and stay there.”