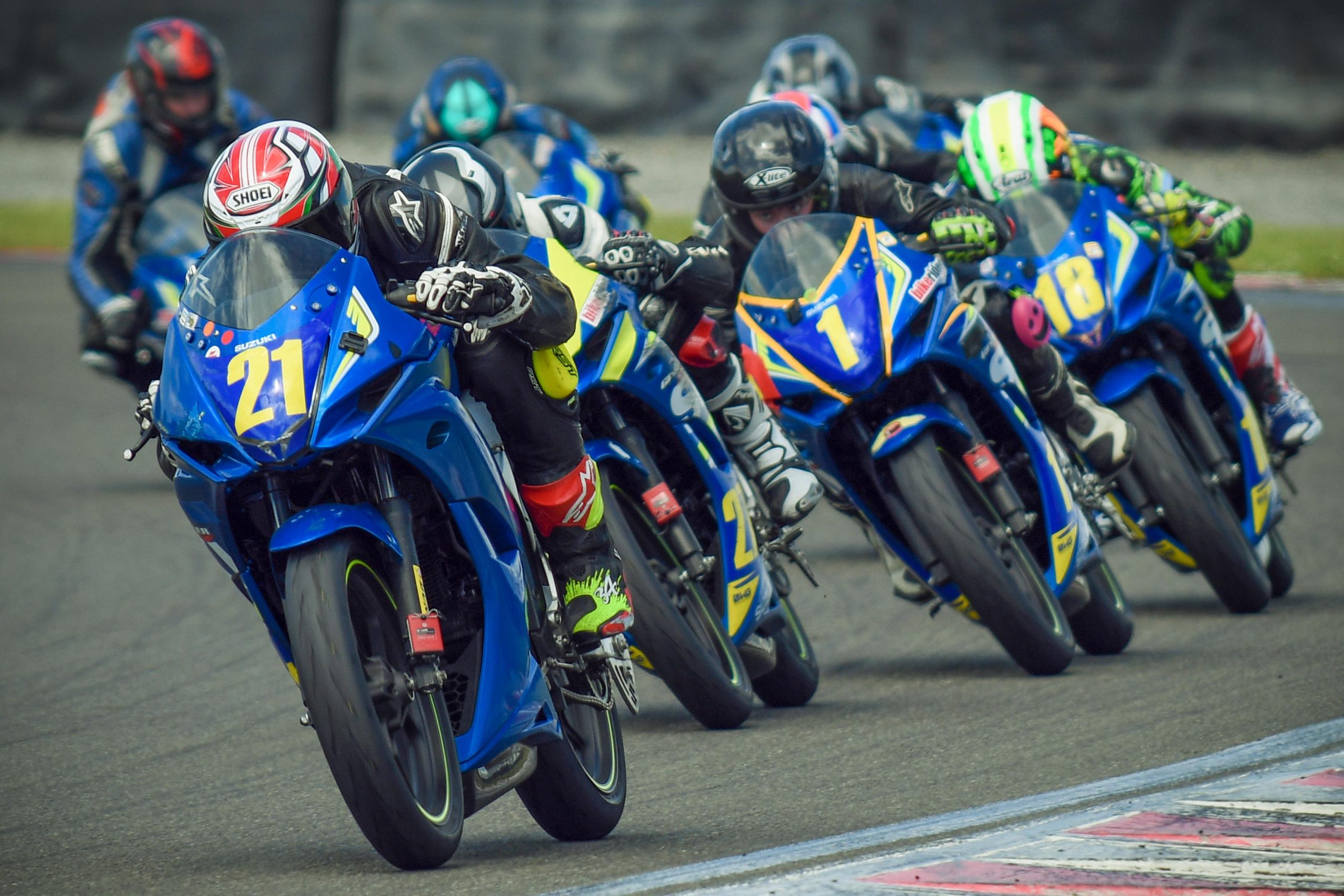 By Mbali20th Jan 2020News
No Comments

The New Zealand GIXXER Cup class has been an integral part of the popular Suzuki International Series programme from the moment that it was first introduced in December 2017.

And the legacy continues on for Suzuki New Zealand, its fledgling series again serving as motivation and an inspiration for many aspiring young Kiwi racers with riders on a level playing field by all racing identical Suzuki GSX150F machinery.

With the slogan ‘Growing Future Champions’ the series has proven itself a stimulating spectacle for three years, the race action always incredibly close and typically ending with a frenzied 10 or 12-bike jostle past the chequered flag.

The racing has often been so tight that the riders would clip handlebars, nudge elbows even down the fast straights, providing edge-of-the-seat action for competitors and spectators alike.

For the recent three-round Suzuki International Series, which wrapped-up on the famous Cemetery Circuit in Whanganui in December, the organisers had removed the 14-21 age restriction, allowing senior racers the opportunity to compete in this low-cost, ultra-competitive class.

Several of New Zealand’s leading 1000cc Superbike riders joined the 150cc action and they also agreed to act as coaches and mentors to the younger riders, many of whom were first-time motorcycle road-racers.

The GIXXER Cup title was won for a second consecutive time this season by Jesse Stroud, the 17-year-old son of Andrew, with Caleb Gilmore runner-up. New Zealand’s 2014 Superbike Champion Dennis Charlett rounded out the top five.

“With 22 bikes on the starting grid and 25 entrants over the three rounds, the GIXXER Cup riders put on an excellent display of close racing and kept the spectator crowds fully entertained,” said Suzuki New Zealand spokesman Peter Goldfinch.

“Lap records at each track were broken, in some cases by as many as eight riders. The series and the competitors are certainly getting faster and more competitive each year. Looking back through the entry lists from day one of the GIXXER Cup in 2017 can be spotted at least 12 individuals who could trace their road-racing heritage to the GIXXER Cup contest and who have now also gone on race in different bike categories.

“It’s probably fair to say that these people may not have even considered motorcycle road-racing as a sporting career if it hadn’t been for their introduction to the sport and subsequent learning experiences enjoyed on the GIXXER scene over the past three seasons,” said Goldfinch.

“As with the previous years, we have uncovered some fresh new talent. With the inclusion of three Superbike riders, it was exciting to see how well the young riders competed with them, with several of the GIXXER riders getting the better of each of the Superbike riders at times. The decision to bring in the experienced riders paid off, as I think all the young riders learned techniques, tips and line selections from them.

“Hats off to Jesse Stroud and Caleb Gilmore, as these guys showed the talent and consistency to finish the series ahead of all three superbike champions. To come out ahead of current national No.1 Superbike rider Daniel Mettam, nine-time national champ Andrew Stroud and multi-class champion Dennis Charlett is a massive achievement and, at this stage of their racing careers, it shows that there’s some real talent in those boots.

“At Suzuki, we are really proud of what has been achieved with the GIXXER Cup so far and we’re particularly pleased to have had eight women competing in the series this season too. We’re looking forward to next season.”